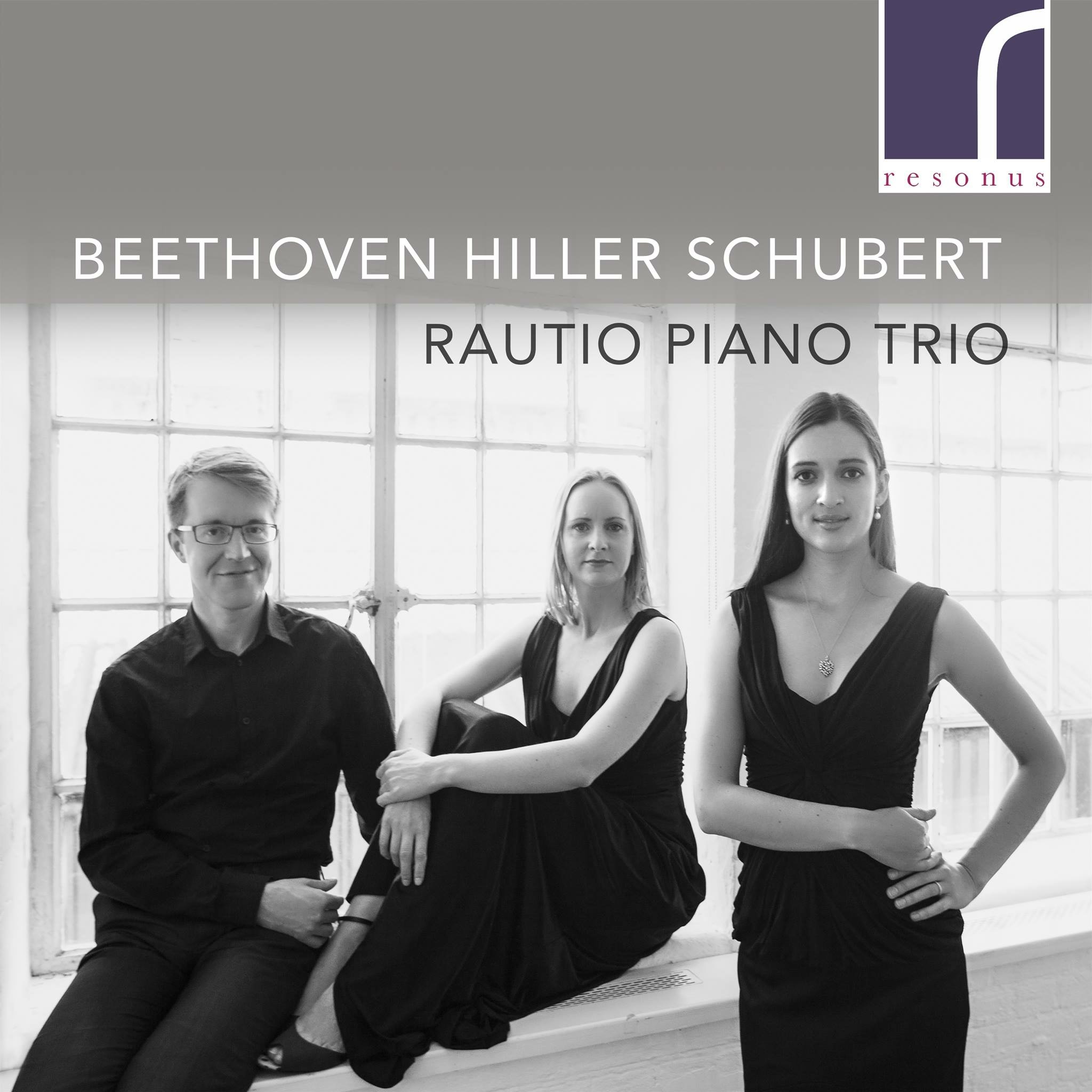 With a programme that includes the world premiere recording of Hiller’s Piano Trio No. 6 in C minor alongside Beethoven’s ‘Ghost’ Trio and Schubert’s Piano Trio in E-flat major ‘Notturno’, the Rautio Trio present three striking and individual works each notable for their use of a nocturne, evoking the quiet night-time and an atmosphere of poetic reflection.

Keeping repertoire alive is a priority for the Rautio Piano Trio as their latest CD, Beethoven, Hiller & Schubert (Resonus), demonstrates. In between fresh, brisk Beethoven (Op 70, No 1 in D major “Ghost”) and eloquent, confident Schubert (Op posth 148, D897 “Notturno”, Adagio) they offer a substantial novelty: the premiere recording of the wonderfully buoyant Piano Trio No 6 in C minor, Op 186, Serenade No 2 (1879) by Ferdinand Hiller (1811-85). Said to be an affable character, this dance-like music smiles right through.

The Rautio Piano Trio played Mozart on period instruments for their Resonus debut (9/16). Here, in a programme of Beethoven, Hiller and Schubert, they employ modern instruments, although these new interpretations display strikingly similar qualities of classical poise, deftness and textural clarity. The Rautio’s approach is a godsend in Ferdinand Hiller’s Sixth Trio (1879) […] Hiller was a significant musical figure in his day, and this premiere recording of the Trio is worth a listen […] The Rautio’s delicate, easy-flowing performance of Schubert’s Notturno is lovely […] There are delights in Beethoven’s Ghost Trio, too – at the end of the first-movement exposition (starting at 1’13”), for instance, where the players seem to be scurrying nimbly on tiptoe, and in the elegantly effervescent finale.

Read about Hiller in an extract from the CD booklet

Hiller was born in 1811 in Frankfurt am Main, a city with a vibrant musical scene, into a wealthy family where his parents encouraged his musical abilities. These fortuitous circumstances enabled Hiller to focus on his own interests and ambitions throughout his life. Hiller was a child prodigy and gave his concert début at the age of 10. Later he worked as a pianist, conductor and composer; he was also a prolific writer, an impresario and he was renowned for his equally virtuosic social skills. Hiller spent a lot of his lifetime travelling throughout Europe. Due to the nature of his affable personality, he met, befriended and maintained an extensive correspondence with many of the greatest composers of the 19th-century music scene – including Mendelssohn, Chopin, Schumann, Brahms and Liszt. However, despite Hiller’s prominence during his lifetime, few of his works are performed today.

Hiller wrote six piano trios, the last of which he additionally entitled Serenade. Piano Trio No.6 in C-minor (Second Serenade) was published in 1879 and despite being one of Hiller’s later works it demonstrates a youthful, exuberant quality. As one might expect from a professional concert pianist, the piano part is suitably virtuosic and exciting. Throughout, there is a lively conversational writing style between the piano and string parts, and the music has a delightful effervescence and lightness. Each of the five movements is full of character, from the operatic overture-style Prelude to the Mendelssohn-esque Intermezzo and the quirky Finale, with its playful dance-like melody. 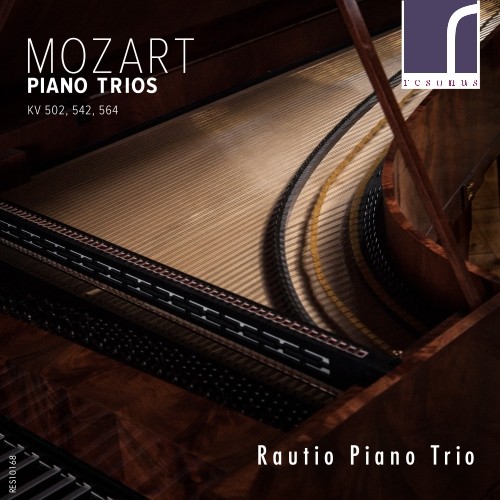 The Trio perform here on period instruments – including a fortepiano that once belonged to the late Christopher Hogwood CBE. This critically acclaimed debut disc received multiple 4 and 5 star reviews and is frequently played on BBC Radio 3, most recently for Composer of the Week (2019).

Barely does a disc come along that unexpectedly brings so much pleasure as this one [..] from the opening notes, I just knew it was a total winner. The balance between the three instruments is beautifully handled (the cello only sometimes emerges from its bass line duties), and the gorgeous tone Jane Gordon gets especially from the upper reaches of her violin is absolutely to die for. The three works on the disc only last just under an hour, but what an hour! According to the booklet note, the Rautio Piano Trio also play modern repertoire on suitable instruments, so they are clearly a force to be reckoned with. I hope they and Resonus will continue to explore period performances of some less well-known pieces for the line-up, too – fabulous recordings, magical performances.
Early Music Review (5 stars)

Mozart’s piano trio don’t come out to play as often as Haydn’s, despite being among his finest chamber works […] So a new recording of any or all of them is always to be welcomed. This disc adds interest by being performed on period instruments, making it something of a rarity in this repertoire. The ear is immediately struck by the fortepiano, a 1987 Derek Adlam copy of an Anton Walter instrument from the mid-1790s, which formerly belonged to Christopher Hogwood. It’s beautifully set up, and remarkably little action-noise is captured in the Potton Hall recording. As delightful as it is to listen to, it is evidently a joy to play, and Jan Rautio leads performances notable for their buoyancy and vivacity.
Gramophone

The Rautio Piano Trio’s growing reputation will only be enhanced by this, their debut recording of three Mozartian jewels. This might be comparatively mainstream repertoire but they approach it with a gratifying freshness that avoids the routine. The use of period instruments affords each work a transparency of timbre, and judicious tempo choices ensure that the performances avoid difficulties of balance that can weigh down modern instrument alternatives, like Haydn Trio Eisenstadt (Capriccio). Trio Parnassus (MDG) largely avoid that problem but are occasionally pedestrian. No such issues affect the Beaux Arts Trio’s 1960s readings (Decca). The Rautios confidently sit alongside them. Rhythmically alert allegros and nuanced allegrettos allow the gut-strung violin of Jane Gordon and Jan Rautio’s fortepiano to draw the listener in. Cellist Adi Tal underlines them both with warmth, the Larghetto (K 502) and andantes (K 542 and K 564) are characterful and aptly gracious. Natural, well balanced recorded sound.
Classical Ear (5 stars)

‘That fortepiano is the key to one of the chief pleasures of this recording. The natural lightness & clarity of the sound and the effortless balance with the period strings, never overwhelming them. These delightful works don’t get out often enough.’
BBC Radio 3 Record Review

‘Pianist Jan Rautio here plays a fortepiano (tuned to A=430 Hz in unequal temperament), with cellist Adi Tal and violinist Jane Gordon using gut strings and lighter, shorter bows. The result is playing of great agility and intimacy which immediately solves some of the balance problems in Mozart’s trios when played on a modern grand, especially in accompanying figures. It’s an impressive achievement, a disc to return to often.’
The Observer (4 stars)

[…] the sheer joy and bounce of the performances win through. […] there’s a natural flexibility that’s refreshing, a gentle way with ornaments (some written, others not) and, especially as K542’s finale launches into its triplet passages, an infectious sense of toe-tapping delight. Most enjoyable, then, and the recorded sound is clear and engaging too.’
The Strad Magazine

‘This is the debut release from the Rautio Piano Trio, and it’s an assured debut indeed. […] There’s plenty of cheerful Mozartian melodic lines passing around the ensemble that can’t help but bring a smile to one’s face.’
Limelight, Australia (4 stars)

Read an extract from the Mozart CD booklet

Mozart wrote six piano trios between 1776 and 1788. Compared with Haydn’s 45, this seems a rather low output, but in terms of significance, Mozart’s trios accomplish an important step in the evolution of the genre. These works are masterpieces and mark a development in the piano trio form as we recognise today. Alongside the usual grace and beauty we associate with Mozart’s writing, the listener will also find a relatively high degree of experimentation and virtuosity particularly in the piano part, which Mozart would have played himself at his concerts in Vienna. The string parts began to display an independent and prominent role more suited to the concert hall rather than the domestic music room. It is this independence that paved the way for Beethoven whose first Trio was published nine years later in 1795. Both composers enjoyed the success of the form as they could perform their own works, impressing audiences with their virtuosic playing, whilst attracting good publication sales.

Exploring historical performance practices sheds light on what Mozart could have imagined when composing these trios. The balance of the instruments is completely reversed as here the strings are the more dominant partners in the ensemble, which is clearly reflected in the writing style. The cello supports the left hand of the fortepiano and the violin writing is sensitive to the keyboard’s sonic qualities; whenever there is a melody in the right hand of the pianist, the violinist must play the lightest of accompanying figures so as not to subdue the melody. This is quite the opposite to the modern set-up where the pianist must endeavour not to cover the violinist and the cellist has to work to project it’s lines. For the keyboard player fast scales, trills and coloratura passages are easy to rattle off on the fortepiano whereas slow legato playing is much more of a challenge. Hence, sustained melodies are best given to the strings. For the string players, adjusting to the fortepiano gives a more intimate quality to the music-making, where textures are transparent and the range of articulations and subtle nuances in phrasing can shine through. Vibrato can be used as an ornament and notes effortlessly shaped and released with the bow. The question of temperament also adds a wonderful new spectrum of colour into the mix. With the piano no longer caged in modern equal-temperament tuning, both players and listeners can explore the specific flavour of each key. For instance, the bright sonority of E major in the remarkable KV 542 has a very different quality from what we are used to on today’s instruments.

Published in the Gramophone Magazine, Period and modern instruments: the best of both world, explores a performer’s perspective on historical performance today.
Written by Rautio Trio’s violinist Jane Gordon.